Having salt-tolerant potatoes is of paramount interest to farmers in salt-affected areas, but reliable cultivar-specific parameters on salt tolerance are lacking. To address this issue existing field data on tuber yield on sandy soil at six levels of saline irrigation (0.5, 4, 8, 12, 16, 20 dS m−1) of 13 varieties for which data in two or more consecutive years were available, were analysed year-by-year with the method developed earlier. The method provides estimates of the zero-observed-effect yield (Y0), and two typical salt tolerance parameters, - i.e., a characteristic salinity level and a decline parameter –, as well as information about the uncertainties and correlations between these estimates. The results indicate that all varieties have a similar lethal soil salinity (20–24 dS m−1). However, both yield Y0, as well as salt tolerance parameters, differ among cultivars, but for a single variety, the estimates vary year by year, and have large uncertainties, underlining the difficulty to obtain robust parameters from single year experiments. The annual variety also hampers the discrimination between varieties. To remedy this, the data from multiple years were united in a single analysis by introducing another – unknown, annually varying - a factor that is limiting the yield in the trials. Two ways to describe co-current limitations often used in models were tested. In contrast to the minimum rule, the multiplicative rule is found to provide an acceptable description of the observed yields overall years. This results in a single set of salt tolerance parameters with a narrower uncertainty bound than from a single year estimation. It shows that with due account of uncertainties, field tests can be used to identify relatively salt-tolerant cultivars while accounting for between-year yield differences. Most potato cultivars have an ECe90 of about 4–5 dS m−1, but for some it is roughly double, while maintaining good yield, suggesting that these varieties are good candidates for salt adapted agriculture.

Summary of the salt-tolerant potatoes tested 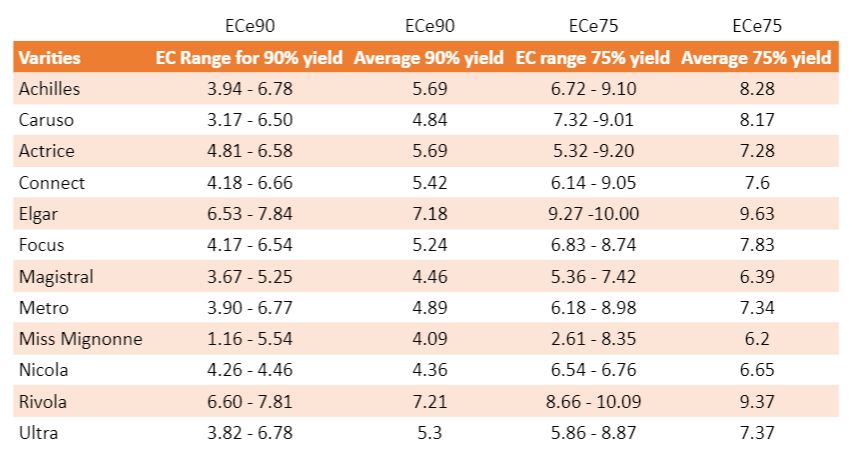